The keyboards connected to our computers are essential to controlling every aspect of our computer experience, and to our communications with everybody we communicate with. A very basic aspect of the keyboard, and of our personal choice (it is really a major aspect of our national identity), is the layout of the keys. In my case, I am using a keyboard with a Norwegian layout, which is essential when writing text in my native Norwegian language.

What happens when someone, or something, changes how the keyboard is working? 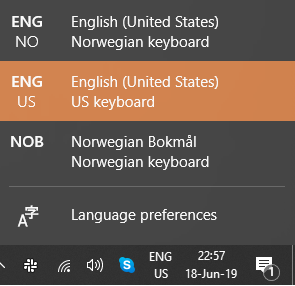 About a year and a half ago I started working on a Windows 10 machine at work (having used Windows 7 until then), but after I while I started running into a particularly obnoxious problem: The keyboard layout would, occasionally, automatically be changed to the US layout, instead of my Norwegian layout.

For somebody who is reasonably competent at typing without looking on a Norwegian keyboard (aka. the “Touch” method), that is rather irritating, because keys like “<“, “:”, “-“, “æ”, “ø”, and “å” suddenly produce completely different characters. The result is a disruption of my current activities.

After some searching I discovered this thread about it, started in 2016 (and still active), and there are indications in the thread’s references that the problem first appeared in Windows 8, at least as early as 2012, maybe 2011.

Based on information in the thread and its references, what seems to be happening is that Windows 10, being “concerned” that the user’s configuration might not be correct in the context of his or her environment, scans the other Windows 10 machines on the network, or obtains information from computers it connect to, and possibly other information, such as the machine’s geographical location, and automatically reconfigures the enabled keyboard layout based on this information.

I do not know if this is correct, but the name of a registry value mentioned in this information, “IgnoreRemoteKeyboardLayout”, indicates that there may be something to it.

This problem seems to have been affecting many users from non-English
speaking countries, especially those working in multilingual, global companies, or those having moved to a different country.

In Vivaldi, I work with colleagues from many countries and we are all using different keyboard layouts, including German, Icelandic, and US layouts.

The thread I found discusses various workarounds, some of them requiring
you to edit the registry (one of which I used to fix my problems), which is something the average user should never be required to do.

Recently, though, I have run into this again with my personal laptop, and as far as I can tell the workarounds are not just not working anymore, it seems
that the workarounds I did apply earlier were removed somehow, possibly by the recent major Windows 10 update. 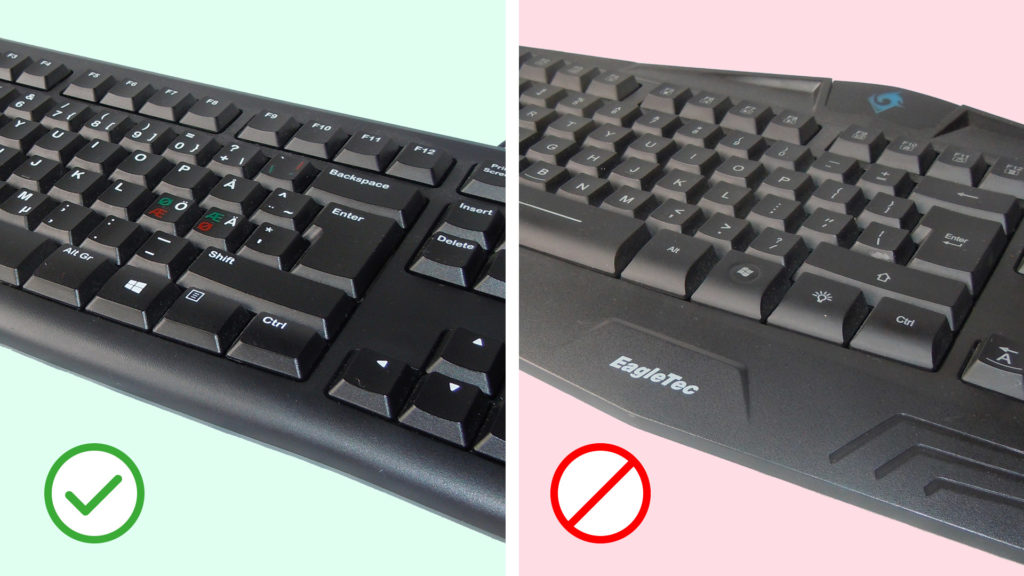 The keyboard layout of my laptop keeps changing to the US layout several times a day, even several times an hour. In fact, I have had it happen in the middle of writing emails!

And what is happening to my laptop is not an isolated case: One of my colleagues has reported the same thing has started happening to his laptop, too.

So, I think Microsoft is being too “helpful” in this case.

I have configured my PCs the way I want them configured, with the UI language I want, and the keyboard layout I want to use, and I did so when I installed Windows on the PC, and I have no plans to change them.

Microsoft, keep your hands off my keyboard!

Update June 24: The jury is still out on this, but a couple of days ago I decided to try two changes: I removed all the extra languages and keyboard layout combinations (again), and also disabled the keyboard shortcuts for switching between these settings.

If this continues to work, it may have “solved” my problem.

However, it is still a “solution” for a problem that should never have existed, the automagic addition of languages and keyboard layouts, and it may be that the workaround only hides the issue.

It also points to what I think is a bad design choice by Microsoft: The choices for the keyboard shortcuts are Ctrl+Shift and Left Alt+Shift (never mind that Norwegian keyboards only have one Alt key, the left one; the other is the AltGr key that is an alias for Alt+Ctrl, used to type various characters like “@”, “{“, and “€”). Both of these shortcuts are used as part of various keyboard shortcuts, and the Alt+Shift key variation is part of the “Switch to previous Application” shortcut Alt+Shift+Tab. What happens if you start to press this shortcut, and decides to not change application after the first two keys are pressed? That’s right: The keyboard layout changes!

And even if these two actions “solved” the problem, it should never have been an issue for my systems, since I never added extra languages or keyboards. Microsoft added them without asking, then a bad choice of keyboard shortcuts exacerbated the problem.

And users that, for various reasons, do have multiple languages and/or layouts enabled, may still be having problems.

Update June 27: After rebooting the laptop, the US layout returned, despite having been manually removed, and the keyboard shortcuts being disabled.

13 thoughts on “Microsoft, keep your hands off my keyboard!”