For modern software developers, there are a number of must-have tools: An editor, a compiler (called a web browser by HTML/JS devs), and a debugger. Further, if you are developing a non-trivial project, especially as part of a team, you will need a version control system.

A version control system is a very important tool when developing software, as it maintains the history of your project, chronicling every change, whether small or major, and it allows you to share your code easily with others. Using the information stored by this system it is possible to specify the source code version to use for a public version of the product or to discover which modification introduced a bug (or fixed it).

There are many different version control systems available. Among the more common ones are CVS, SVN, Hg, and currently the most popular, Git.

All of these systems are generally implemented as command-line tools, and this lets the user perform many advanced actions, especially using scripts to repeat the operations. However, maintaining source code updates only via command line operations becomes difficult very quickly, it does not scale well. A graphical UI (GUI) for the version control system is needed for any major project.

Some of the systems, like Git, also have some basic GUI applications, but their usability is limited. This has opened up a market for more advanced version control GUI applications, such as the one I have used for 10 years, or so, SmartGit.

Syntevo’s SmartGit, like most such tools, has an advanced display of projects, updated files, conflicted files, differences between the currently stored version, and the currently edited version, graphical representation of the project history, etc.

All of this is very useful to developers, especially when they are working on big projects. 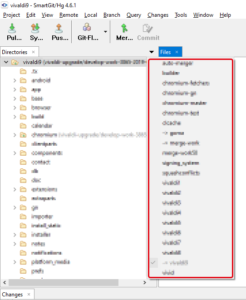 Five years ago I wanted to update to the then newest version of SmartGit, v6.5 (the most recent is v19), from my then current version, v4.6.

Unfortunately, I discovered that the SmartGit developers had made some UI changes that broke the tool for me.

One of the UI features I use frequently is a dropdown menu on top of the directory explorer panel listing all the projects I am working on, and which allows me to easily open a second project in a new application window. 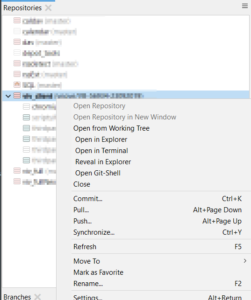 In the new version, they had removed this dropdown, and moved all the projects into the explorer panel, alongside the directory views, and the default operation was to open all of these in the same application window (it _is_ possible to open a second window). When you, like me, are working on 20+ various project checkouts, half of them having more than 500 000 files each, having more than one of them opened in the same application window is, in a word, unworkable. Even having the list of all the projects in that panel is in my opinion unworkable with a setup like mine.
I reported this issue to the developers at Syntevo, informing them that this was an upgrade blocker for me. Their answer boiled down to “Won’t fix it”. I responded with “Won’t upgrade”.

I have stayed with SmartGit 4.6 ever since, despite the other issues with it, such as it being slow, leaking memory, some of which could be due to it being implemented as a Java application.

I have explored other similar tools, but the ones that look most useful have one major problem: They all require that before you start, you must create an account with their code repository and log the application into it.

That is unacceptable to me, because I am not generally going to be using an external repository. We have our own local servers holding the repositories for our projects.

I do not mind buying a license for a useful product, but I do mind having to run a product logged into an external service, especially one I don’t need.

So, if Syntevo, could just fix the GUI in this area (and haven’t broken anything else important), they would sell at least one license, and since this would make the tool work better again for Chromium sized projects, they would likely sell even more licenses.

Syntevo: Make it an option!

1 thought on “Where did all the nice things go? SmartGit project dropdown”